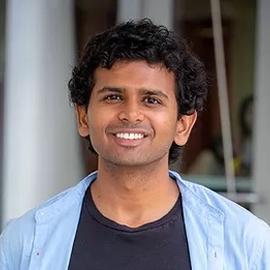 Vish Ramesh is a NIH National Library of Medicine Postdoctoral Trainee in the Department of Biomedical Informatics and Department of Computer Science and Engineering at UC San Diego. He completed his PhD in 2020 with a focus on developing human-centered artificial intelligence tools to assess the symptoms of patients with neurological disorders, focusing on stroke, Parkinson’s disease, and respiratory disease. Vish applies deep and machine learning techniques on patient data acquired with ubiquitous technologies - smartphones, accelerometers, depth, audio, body skeleton, and video footage from time-of-flight cameras. His current work is focused on supporting remote stroke diagnosis with augmented and virtual reality in addition to machine learning. Vish develops and validates these technology-augmented decision support systems in active clinical environments.

Motivated by his participation in Blue LINC, a healthcare incubator he co-founded in 2016, Vish is in the early stages of spinning off his stroke diagnosis technology he developed as a PhD student into a start-up – Homni Health, Inc. As founder and CEO, Vish currently works with his team (that includes his co-founder and CSO Nadir Weibel) to develop a minimal viable product and a plan-to-market, while seeking sources of seed funding from investors as well as through grants. Vish has also completed internships at Samsung Research America and IBM Research and led funded collaborations between UCSD and IBM.

Through a start-up and a continued interdisciplinary career in academia, Vish hopes to be able to transition his stroke work from research lab to clinic where it can be used to ultimately help stroke patients by improving their treatment and thus rehabilitation.